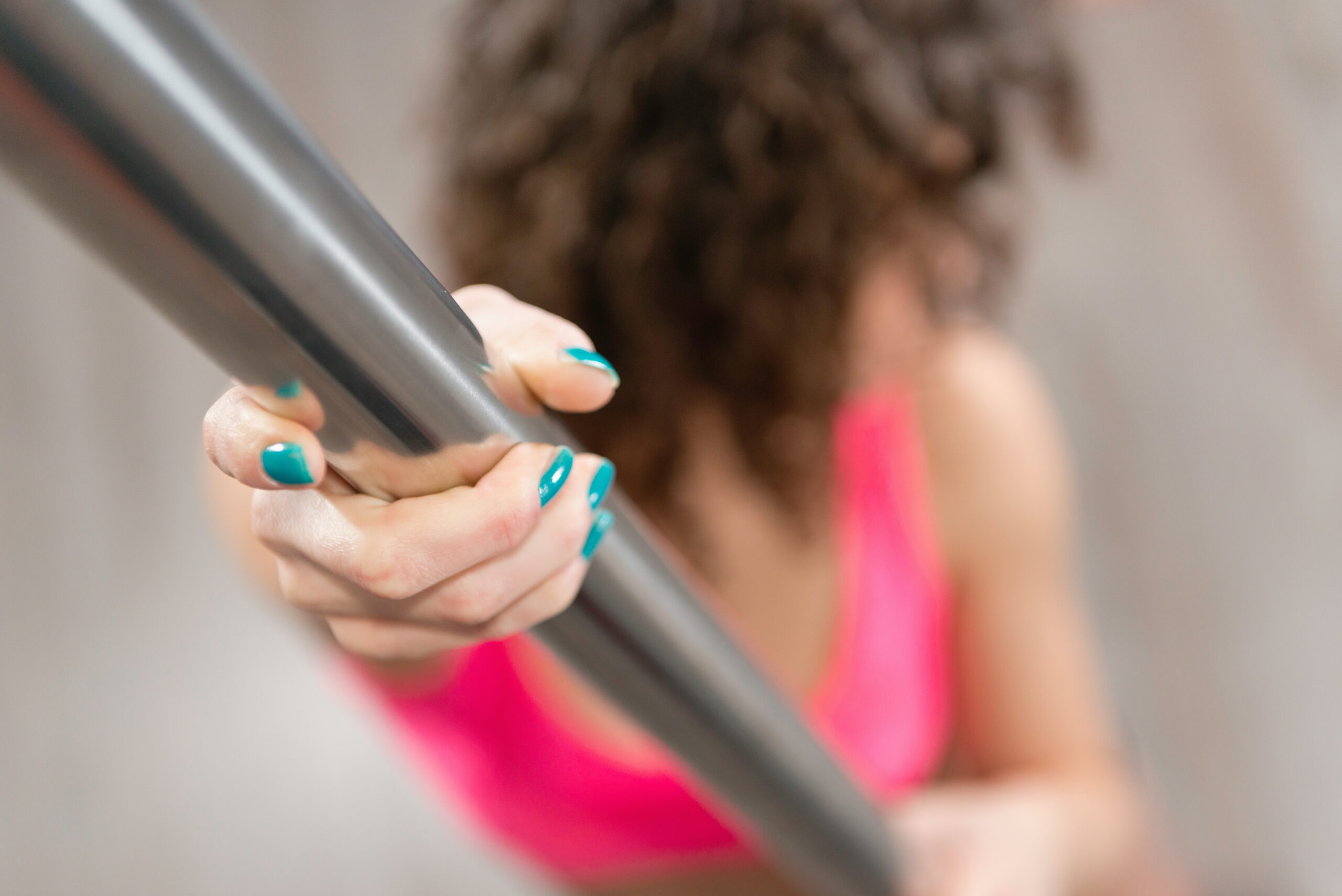 If you’ve ever been even a little depressed, you’ve most likely been advised to exercise. Those of us who have chronic mental illnesses hear this so much, we often start to resent the people who bring it up. If you’ve ever laid in bed, staring at the ceiling wishing you could go to sleep and never wake up, you know that getting up to go to your local ZUMBA class feels as likely as getting up to go present an award at the Grammys.

And yet, after years of depression, hypomania, panic attacks and distressing thoughts, I am a complete convert. Now, I exercise one or two hours a day. I’m also on five psychiatric medications. I’ve graduated from the local hospital’s Dialectical Behavioural Therapy program. Plus, I see a therapist on a regular basis. Exercise is not a miracle cure, but has been an important part of my recovery. And when I say exercise, I don’t mean jogging or soul cycle or bootcamp or even yoga. I mean hanging upside down on a metal pole from your right knee pit.

After 26 years of abhorring sports and exercise in any form, I’ve become addicted to pole dancing, and it’s saved my life. Before I started aerial arts (aka dancing in the air using a pole/silks/hoop/monkey bars on an elementary school playground), I always hated hearing the “have you tried exercising” line. During the high episodes of my bipolar disorder, I had enough energy to pull myself to the gym and onto a treadmill. Then my low episodes would always come back. They would make something as simple as walking down the street into a physical challenge. Once I started my first mood stabilizer, my hypomania vanished immediately. This left me with nothing but groggy depression and constant anxiety.

While my doctors played trial and error with my meds, my boyfriend dragged me to the community centre once a week. He would play basketball with his brother while I tried out the ZUMBA class across the hall. Fortunately, the ZUMBA instructor at the Trout Lake Community centre was more than an expert in Brazilian jazzercise. She was also a pole instructor at the studio down the street. She was my gateway into the world of lifting your entire body weight up off the ground in a fun, sexy way. With no previous experience in anything physical and a history of lying in bed crying, I was always the worst in the class.

But when I saw my instructors do things that seemed to flip gravity the middle finger, I felt hope for the first time in a long time. The possibilities of pole dancing gave me a reason to wake up in the morning. If I was dead, then I’d never be able to learn how to climb the pole or spin really fast. It might seem trivial, but this excitement was enough to wipe out the lingering suicidal ideation that my medication couldn’t seem to touch. I was going to be strong and wild and upside down, and I couldn’t wait.

Flash forward two years.  The excitement of being strong had turned into something troubling, and my mental health began to crumble. This time, it was pole dancing that was chipping away at my mental wellness, one class at a time. I had forgotten about the girl years prior who could barely walk fast enough to keep up with her friends. I was now comparing myself to girls who had never known chronic mental illness, and had also been training as dancers or gymnasts since they were small and malleable. I’d leave the pole studio in tears after failing to swing my body upside down on the pole with my legs perfectly straight and my toes perfectly pointed. I was disappointed in myself for not getting certain “tricks” that my friends managed to pull off. I started dreading class, knowing that I would probably fall or fail yet again.

The aesthetic of pole dancing had become much more important than how it made me feel. I found myself trying for a perfect Instagram pose instead of for my own satisfaction. One of the side effects of my medication is increased sweating. I began to hate my pills for making me slide off the pole, taking for granted the fact that these were the pills that had stabilized me and allowed me to show up to an exercise class every single day.

A few days ago, frustrated as my sweat sent me sliding down the pole yet again, I nearly screamed as another dancer tried to turn off my fan. I reminded myself of the person I was before all the meds and the therapy. I left the room in shock and took a serious look at who I was becoming. How had I let the thing that had given me hope and inspiration become my main source of stress and negativity?

Pole dancing had given me a creative spark as an artist. Throughout my mental illness, I worked as a musician and songwriter. However, I had gotten to a place where I no longer felt curious about music. Instead, I felt frozen, comparing my own music career to those of my peers. Dance was another way to express myself that was separate from the music world, where I felt judged and discouraged.

I even felt brave enough to connect the two worlds. My hope was that my excitement for pole would turn into new-found excitement for music as I learned a routine to my own song and turned it into a music video. I worked hard with my instructor to learn new moves, and bring them alive with emotion. The version of me that you see in the video is enjoying the process of turning movement into meaning, and I’m giving the choreography every I’ve got.

When I watched the footage back later, I was a little disappointed. I wanted my fellow pole dancers to see my “Jasmine split,” my “hood ornament” and my “stag handstand.” The filmmaker, who is not a pole dancer and had never seen the routine before, captured instead the flow of my movements, the interesting shapes my body makes, and look on my face as I danced. The part of me that has become obsessed with nailing the moves was louder than the artist inside of me. I cared more about what other pole dancers would see when they watched the video than what anyone else saw.

For two months, I sat with the video, not sure what to do. I thought that if I released the video, people would think that I was a failure for practicing pole for almost two years and having no fancy tricks to show for it. But as I write it down now, it’s clear to me that I’ve lost my way in my struggle for perfection.

Last week, I sent the video to the pole teacher who choreographed the dance with me six months ago.  She immediately sent me a message back. “I’m so proud of you. I love it.” I watched it again and realized that the filmmaker had captured the healthy parts of pole dance. The movement, the emotions, the flow. The picture perfect poses were not important. My obsession with them was turning my favourite coping skill into another source of insecurity.

Today, I’m sharing the video with you. I’m trying to look at it the way that I looked at my first pole instructor, as she gracefully did what I would later learn was a simple spin. A couple of years ago I could barely get out of bed. The fact that today I can dance at all is a cause for celebration.

Sarah Jickling is a Vancouver-based musician, performer and mental-health advocate. In 2019, Jickling is a touring performer with the BC Schizophrenia Society’s Reach Out Psychosis program and teaches songwriting as an artist-in-residence by UBC’s Wingspan Disability Arts. She dances at Tantra Fitness in Vancouver and is working to combine her music with her love of pole.

Dreaming of a Green Christmas